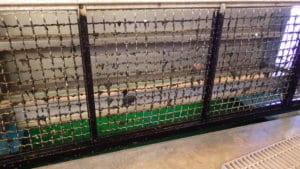 Situation
Situated in the central part of the state, Albuquerque is the most populous city in New Mexico with a population of nearly 600,000. Due to a combination of windborne contamination upstream and long residence time in the clarifier series, algae growth is a major source of solids loading in the 38 MGD process stream. The current removal strategy for this contaminant is limited to a stationary coarse grate which captures a negligible amount of algae, allowing a majority to pass directly into and fouling the ultraviolet treatment units and other downstream processes. This causes a reduction in overall plant operational efficiency and increases the amount of maintenance necessary on downstream processes.

The Albuquerque Wastewater Treatment Plant worked with Hydro-Dyne to utilize its H.O.S.S. technology 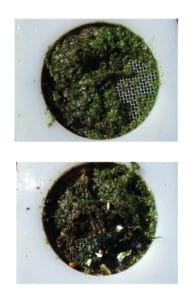 to better understand the characteristics of its clarifier effluent and design a system to better protect against the intrusion of algae and other solids impacting their UV disinfection process.

Solution
Eliminating the algal suspension requires fine screening which can cause a large headloss if not sized properly.

Twenty-three individual trials were performed using sample flows of wastewater to measure differential headlosses across a variety of mesh opening sizes. Each test scenario was programmed into H.O.S.S.’ onboard PLC by the technician and every test ran until the sample for the desired opening size reached a predetermined blinding measurement. After each of the tests were completed, the technician removed and visually inspected the sample screening elements to note blow through, hairpinning and other distinguishing characteristics of the samples. 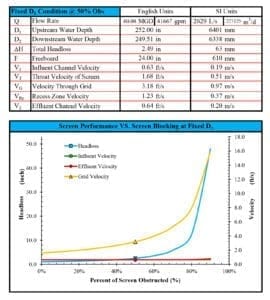 With the characteristics of the influent now known, a 2mm wire mesh screen at a screening depth of 43” (direction of flow) with a variable frequency drive (VFD) was recommended to most effectively capture algae and other suspended solids. The filtration length available to the fluid flow will be 35” when the presence of impermeable elements of the design are considered. Under peak conditions at 100% blinding, the equivalent thickness of the algal mat will be approximately 1/8” at a maximum production of 43.7 cubic feet per hour. Under average/normal conditions the actual daily capture of algae is expected to be near 1.09 cubic feet. A screen of this design will capture TSS in the most effective and efficient way possible during high loading instances due to sudden algae blooms that can rapidly increase solids loading while maintaining optimal headlosses.