H.O.S.S. Provides Valuable Intel to Utility as it Expands to 50 MGD System – Demonstrates Solids Capture Improvement by as much as 90% 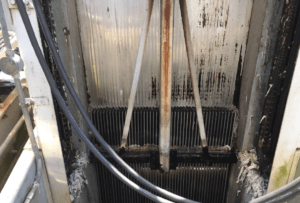 Situation
The Tryon Creek Wastewater Treatment Plant is a 38 MGD activated sludge plant servicing Portland, Oregon and surrounding areas. The current headworks system at the facility consists of two single rake mechanical bar screens with 5/8” (15.9mm) openings that are nearing the end of their operational lives. They are slated to be replaced during a planned expansion of the headworks to increase capacity to 50 MGD. These screens suffer from reliability concerns, lack provisions for odor control, and are designed at the lower end of the SCR spectrum, allowing a high percentage of solids to bypass the screen. Currently, the system is largely gravity-fed. However, a centrifugal pump may be a part of the expansion to a 50 MGD facility.

Since there were multiple options the plant could choose as part of the expansion, Tryon Creek Wastewater Treatment Plant wanted to be prepared to know how to move forward in any eventuality.

The facility worked with Hydro-Dyne to utilize its H.O.S.S. system to have equipment design identified for multiple scenarios. 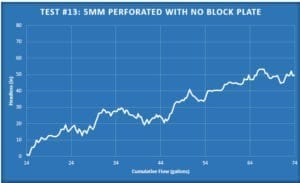 Solution
A variety of screening scenarios were programmed into the H.O.S.S. and conducted over the course
of several days and times to thoroughly understand how periods of peak flow would be managed under multiple conditions. H.O.S.S. tests revealed that the current 5/8” mechanical bar screens
could only operate at 20-30% Screenings Capture Ratio (SCR).
Tests were conducted to identify the most effective balance between the protection of downstream processes, expected equipment maintenance, and capital outlays for both a gravity-fed and pumped system scenarios. In all, 46 tests were conducted. 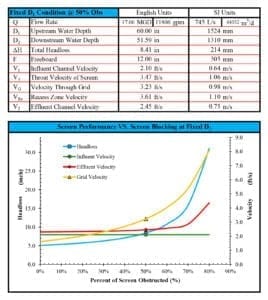 After thorough analysis of H.O.S.S. data, headworks equipment utilizing a 5mm perforated plate grid and variable frequency drive was recommended for the plant in the case it utilizes a centrifugal pump.

This would improve screenings capture by as much as 70-90% over current equipment and enable the equipment to handle instantaneous large solids
loading that could occur.

A 6mm perforated plate screening element was shown to sufficiently protect downstream processes while allowing organic material to more freely pass through the system in the event the utility did not utilize a pump. The intelligence and recommendations provided by H.O.S.S. allowed the utility to make better informed decisions in the upgrade of the plant to a 50 MGD system.