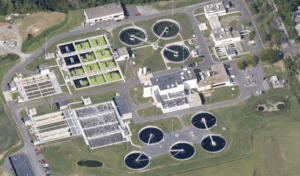 The Saratoga County Sewer District No. 1 Wastewater Treatment Plant was removing an unsatisfactory amount of screenings in its headworks due to design and mechanical issues with their three multi-rake bar screens. One of the three screens was not operational due to mechanical failure. Saratoga County incurred a significant amount of unforeseen maintenance expenditures on its screening equipment and conveyor system which had to be disassembled due to a malfunctioning trough that allowed large solids to return to the system.

Saratoga County Sewer District worked with Hydro-Dyne Engineering to implement its H.O.S.S. system to learn more about its influent stream to understand why its current configuration wasn’t performing as effectively as needed and to make design modifications to reduce capital and maintenance expense. 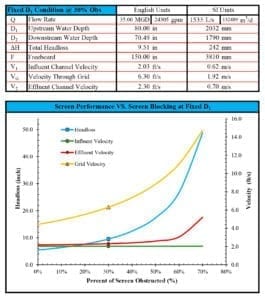 Multiple headworks design trials were performed using sample pumped flows of wastewater to measure differential headlosses across grids of different opening types and sizes. Interpretation of the data involved comparison of the blinding rates of the individual scenarios on either side of the screen. Testing both the influent and effluent streams enabled the utility to understand their current screen’s performance to determine whether another headworks design would significantly improve system performance. Blinding rates in tests of the plant’s existing equipment showed little blinding difference. It became evident that the existing headworks design was not removing a sufficient amount of screenings to provide the protection necessary for downstream processes.

Fifteen screening scenarios were performed to identify the most effective and efficient headworks design. Trials testing headworks designs utilizing perforated panel screening elements of various size with thorough screenings washing and compaction provided the highest capture of solids, but the disadvantages of higher capital expenditures, reduced capacity, and channel modifications proved the impracticality of these designs.

Trials running a 6mm slotted sieve plate design exhibited pressure drops following a second order polynomial trend, indicating a rapid increase in blinding as the screenings mat developed into a more effective secondary filter.
A 20” headloss was observed during 15 minutes of flow rate, corresponding to a 68% blinding rate of differential pressure. Applying this knowledge to the conditions of a screen in-situ, a through flow screen submerged in a channel of about 72 inches of downstream depth would need to travel approximately 72” in 15 minutes to blind to 68% (1.66 feet per minute) which would capture 2.35 cubic feet of screened material per hour. 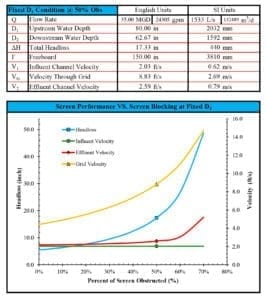 While a 50% blinding factor is commonly recommended using traditional assumptions that only account for a screen’s typical screenings capture ratio, results from H.O.S.S. calculated that a 30% blinding factor is suggested for this plant’s unique flow to allow the most complete protection to downstream processes due to the plant’s low collection rates. Headworks design utilizing screening equipment with 3mm laced link grids would achieve this level of protection.