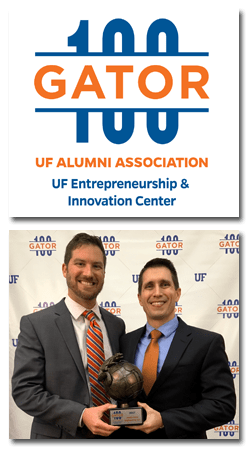 CLEARWATER, Fla. – Hydro-Dyne Engineering, a leading manufacturer of custom-engineered screening and grit removal equipment, was named to the University of Florida’s 2017 “Gator100” for the second year in a row during a ceremony at UF’s J. Wayne Reitz Union Grand Ballroom.

Named after the University of Florida’s mascot, the Gator100 recognizes the 100 fastest-growing businesses owned or led by UF alumni.  Ernst & Young calculated each company’s compounded annual growth rate (CAGR) over the past three years to generate the ranking.

“Our commitment to designing and manufacturing the world’s finest lines of equipment for the protection of critical water and wastewater processes has enabled us to make continued investments in physical plant, manufacturing processes and most importantly, an exceptional team, to meet the growing demands of our industry,” said Jay Conroy, President, Hydro-Dyne Engineering. “We are fortunate and honored to be recognized by the University of Florida alongside a number of other companies who are transforming markets and creating the future.”

Headquartered at its 110,000 sq. ft. manufacturing facility in Clearwater, Florida, Hydro-Dyne Engineering has grown at a compound annual growth rate (CAGR) of more than 27 percent.

“UF alumni have created and guided some of the most innovative and profitable businesses in the nation and world. The Gator100 celebrates the very best of our Gator entrepreneurs,” said Timothy Walsh, the Executive Director of the UF Alumni Association and Assistant Vice President of Alumni Affairs.

With nearly 40 years of experience and more than 2,000 installations worldwide, Hydro-Dyne® Engineering, Inc. is one of the world’s leading manufacturers of custom-engineered screening and grit removal equipment for municipal and industrial water and wastewater facilities. Hydro-Dyne is one of the only manufacturers in the water and wastewater industry that owns its own patents and performs all equipment design, fabrication and assembly in house.